I mean … I was feelin’ fine.  I made great eats for my kiddos ‘n me at brunch time.  I felt great. 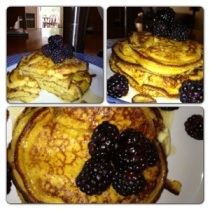 Made these today for everyone … with a side of bacon. I used fresh butternut squash and apples baked in the oven to sweeten them. GOOD.

I felt good when the Sophie girl asked me to Tum (come) on and jump with her … Which I did until I was so tired I had to rest.  Then I chased her round and round the house.  One day I am going to video our path through the house.

This just might have caused my pain … I don’t know … what do you think?  No, it wasn’t this, because I still felt great afterwards.  Good enough to ask Mikey what he wanted to do.  I mean I was gonna go to the gym and work the parts of me that I saved in case Mike wanted to be a gym rat.  He didn’t wanna be a gym rat, he wanted to be outside in the sun.  he wanted to hop on our bikes and burn some rubber.  It was a GREAT day for doing just that too.

I was so proud of us when we learned how to ride up the hill in front of our house so that we could just bike our way to the school.  We used to pack up the bikes on the car and head over.  Now, we ride through the path in the woods.  Heck we have gotten so good at biking we can even take our street tires on the gravel road behind the ball parks so we can ride the streets of the schools behind our house.  … Ok … to dull the pain Mike bought wine … so If I start to lose coherency during this post … forgive me.  I told you I was hurting.  We broke out the meds.  😀

Maybe it was the bike ride the other night …. look at me sporting my flash gear.  Aren’t I cute???

Yep … the reflective gear … Hey … I don’t trust Drivers to see me.  Mikey doesn’t feel he is as sexy in his gear as I am … so he refused to pose.  I will forgive him this time.

Seriously, I don’t think it was the night ride that caused the pain.  I think it ws the 195 I squatted yesterday and the new machine I used with 135 — works like a regular squat bar.  then there were the weights and the 30 pound kiddo I lifted up and down stairs — holding him is a serious workout — seriously.

Why am I blathering about what could have caused this?  BECAUSE my ride kicked my butt today.  It all started out fun and innocent.  Look I will show you.  My phone took fuzzy pictures to add ambiance for you to look at. 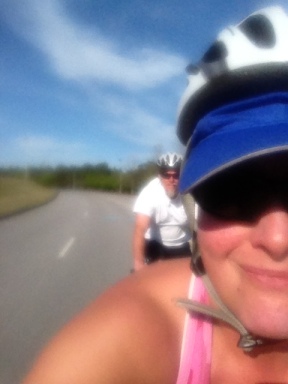 Mikey on the rear 1

What is the stop sign of frustration?  Well, it was where three cars arrived at the 3 way stop just about the same time we pulled to it.  Two cars went … so that made our slow-to-a-stop-wobble-and-stay-on-your-bike possible.  BUT NO … this one guy had to just sit there and make me nuts.  Then he waved me on just before I wobbled over to a crash.  I was so ticked.  This is where the boobs and bum come in … 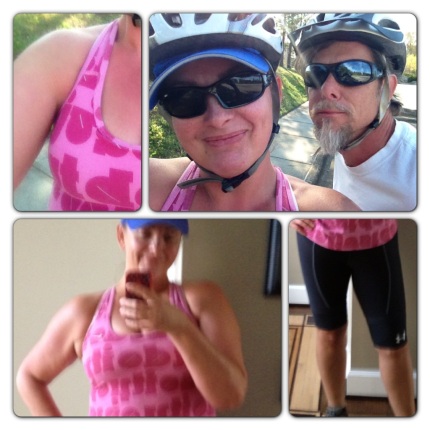 So what does boobs and bum have to do with a goofy driver?  Mikey said that was the guys problem.  Ok … so I do have boobs … I do have a bum … but I also have a GUT.  he must have been a Mega nerd to have been gawking at me for that LONG!  Just sayin’.  I was hot … there was no way I was wearing sleeves … I have to create some clothes to wear that I can stand the heat in … just sayin’ … that don’t show boobs.  I guess Mikey Might have a point … I took a pic of myself that did show there could be a possiblitly for distraction, but Mikey said I could NOT show that  … see his serious face.  He also said there would be no rumpas pics … no matter how nice mine might look … I am dubious of anyone but him wanting to gawk at that … but WHATEVER!  I guess that was why the guy almost killed us with his waiting … I guess.  Stuff like that makes me nuts when we are out riding.

We managed to ride for little over an hour and a half … it was wonderful.  The hills began to HURT … and I crippled myself somewhere along the way … not really cripple, but I am super sore now.  Somewhere in all this my legs began to DIE.  I felt every muscle I had used squatting the day before.  I mean EVERY muscle.  The super fun thing about riding through the wood is the nasty bad-butt hill you have to go up to get to the house–YIKES.  I forgot to leave something for the hill.  I made it, but DANG, I am feeling it!! So Mikey got us some wine and Epsom Salts to soak in … I am gonna shut up for now and jump in that water.

I Just felt like whining to you all about it all.  Thanks for listening.

All-in-all it was a GREAT Day that is about to be made better by wine and hot water.  😀